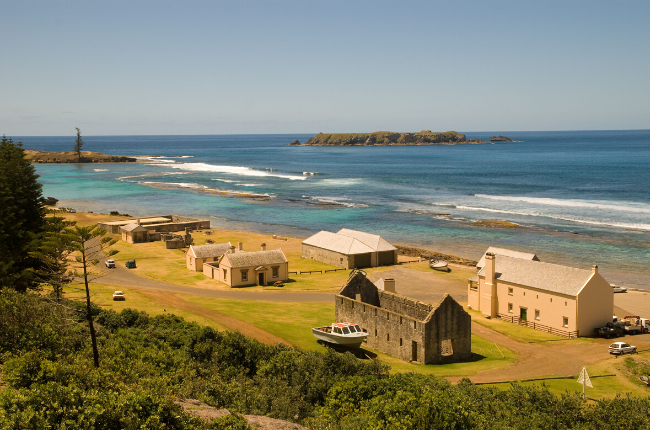 If you were to imagine yourself on a secluded island, you’d be picturing the perfect holiday escape. But to live on one is quite different. Just ask Graham Hill, the JLT Public Sector Account Manager for Norfolk Island Regional Council. Graham has visited the island numerous times in the last seven years and shares his insights into its unique insurance needs.

A slice of paradise in the South Pacific

Popular for tourists looking to unwind, Norfolk Island is a beautiful, remote destination in the South Pacific. It has a population of approximately 1,700 people and is part of the ACT federal seat of Bean.

But being more than 1,000km from the mainland has its challenges. For one, resources can only arrive by ship or plane. And there is usually only a ship every two to three months.

Transporting resources to and from Norfolk

Most of the island’s resources arrive by ship.

However, the island’s rugged coastline, unpredictable weather and precarious sea conditions mean that ships often need to anchor a kilometre from the shore. Cargo is then unloaded at sea into small, unmotorised boats called lighters. These are then towed to the wharf by launches.

And what about transporting items off Norfolk?

With no recycling facilities on the island, all waste is sorted into recyclable or otherwise and then shipped to Australia or New Zealand.

A historic type of insurance cover

While this type of cover is necessary for other councils, they primarily use land-based modes of transport like trains and trucks instead.

Norfolk’s heightened need for the typically historic Marine Cargo Insurance is a result of their modern-day dependence on sea transport. This provides insight into what makes their council’s needs so unique.

The distinctive claims on Norfolk

Many insurance claims that come from the island are somewhat unique.

Another claim involved the replacement of a destroyed lighter. But this is no ordinary type of boat. Lighters are hand-built using specific materials and skills that have been passed down from generation to generation.

Their replacement materials are generally sourced locally but some unique supplies like copper nails have to be imported. And due to Norfolk’s reliance on marine transportation any setback at all can have large flow-on effects.

Importantly, Norfolk Island Regional Council isn’t at greater or lesser risk than other councils. But its risk is certainly different.

For example, Council is responsible for the island’s telecommunications which is certainly not a common scenario.

Also, medical emergencies are likely to require an aerial evacuation. This is because the local hospital does not have the facilities to provide surgical services, much like many remote communities on the mainland.

To assist Council with these challenges, Statewide Mutual is working on a range of risk assessment and mitigation strategies. These include workshops which facilitate the development of Council’s risk register and assist Council to participate in the Board-funded initiatives.

The value of Statewide Mutual’s support

Thanks to our 17-year partnership with Norfolk Island Regional Council we have a deep understanding of the island’s distinctiveness.

It’s all part of the way we work to get to know every Member’s region. Because with knowledge comes a deeper understanding of circumstance – and a superior service.